This tool lets you combine sequence of TGA images into less PNG images by blending specified number of surrounding input frames into one output frame.

Specific use case is generating smooth video files from Quake 3 and derived games using cl_avidemo, which tells the game how many frames per second should be exported into TGA files. While it's true humans perceive about 30 frames per second as continuous movement, it's more complicated when it comes to video games or rendered scenes. Unlike a video camera, game without built-in blur support produces sequence of perfectly sharp images. So, when a camera recorded object is moving, you might notice it gets fuzzy (in direction of movement) when pausing the video. This is why we perceive the movement as smooth, while an old game running at 30 FPS seems jerky; frames lacks transitions between them.

To solve this issue, games are usually played at high framerates (over 100 FPS), which makes the missing transitions less noticeable. But, because it's impractical to deal with video files having over 100 frames per second (instead of standard 30), you might want to introduce scene blur on your own.

Game generates 150 TGA images for each second of the demo (usually it slows down because of limited hard drive speed).

This is just a small area of screen, for clarity. Notice the bush movement between first and last frame.

Now, we're gonna blend each 5 images into one like this:

Right now, we have one blurry frame instead of 5 sharp. 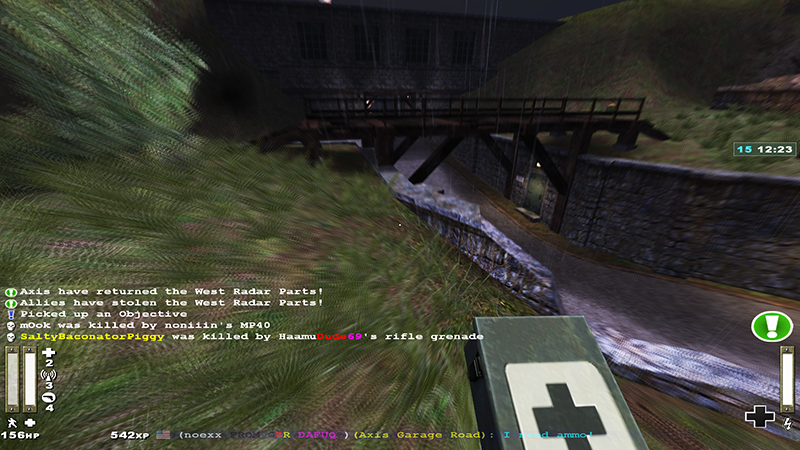 As you can see, objects which moved are now fuzzy. At this point, you can concatenate all merged frames into a smooth video file!